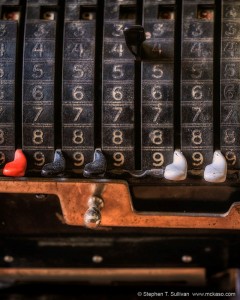 No town is complete without a bank and ours of course is a branch of the trusty First National.  We are served by the train that comes through once a day and that of course, brings money to our community.

Here you will see some of the accessories used in the daily operation of a very important business in our little village.   One such item is a check writer as seen in the photo and along the counter you will see many more things that were newly invented around the turn of the century.   We have a strong box that came off the stage coach and not what you may have seen in the western movies.  It is strong enough to hold most things of value, if by no other means then weight.

The teller cage came form a bank in Whitewood, South Dakota.  As far as we know the last time it was used was when the bank was robbed by the “Hole in the Wall Gang”.  It was replaced with a cast iron teller cage which the bank thought might stop the robberies.  We also have a safe from the First State Bank and it dates from the early 1900’s.  The bank went out of business in the early 30’s and Dobby lost ten dollars when it closed.

All the teller duties were done by hand.  there were no electric typewriters, 10 key adding machines or computers in those early days.  Somehow things managed to get done and at the right speed for the times. For some reason people were in less of a rush in those days.  We have a register from one of the local banks that shows some of the early transactions made on a typical day such as “Mrs. Jones deposited .25 – savings”.

Of course, if you needed crop seed money or wanted to buy a new team of horses, oxen and maybe later a new fangled tractor the bank was the place to come.  It always helped to stay on the good side of the banker.

You will also see on the inside of the bank a patent Attorney’s office with some of the patent books for a six month period of 1906.  Wherever you see a piece of paper sticking out of the book, there is something on that page that Dobby has in his vast collection.

What a marvelous age to live in.