This was the second original home of Robert “Bob” Anderson.  He was born into slavery in Green County, Kentucky in 1843.  He and his mother were owned by Robert Ball.  His father was 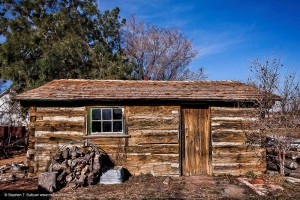 owned by a neighbor, Alfred Anderson.  Bob was given the name of Robert Ball by his master.  His mother was sold when he was 6 years old and he never saw her again.  After the war, he legally took his father’s name of Anderson.

In 1922, Bob Anderson, 79, married 22 year old Daisy Graham and moved her from Arkansas to Nebraska.  He died 8 years later at the age of 87.  She continued to run the farm until she lost the land in the 1930’s.  She then moved to Colorado and spent her last years in a nursing home in Colorado Springs.  She was 96 years old at the time of her death.  The picture of her over the bed in the cabin was taken in her own home in Hayden, Colorado.

Grandma Chandler was a niece of Bob and Daisy Anderson and she and Hayes lived with him in the cabin for a short time after they were married.

Bob Anderson was well thought of in the community and was buried in the Hemingford Cemetery.  Daisy is buried in Colorado, although she wanted to be buried beside her Bob in Hemingford.

This cabin was not the first, but the second structure that he built.  The first, being a soddy that he lived in until this building was complete.  He hauled the wood from the Pine Ridge area and used it as his main home until he built the last house, which was a wooden frame building that he and Daisy lived in. This building then became a tack room and entrance to the root celler for him.  The logs are hand sawn and hewn.

The cabin was brought to us on a flat bed trailer in pieces which resembled a set of partially built Lincoln Logs.  The main center beam is the original, the others are replacements.

When Bob lived here alone, his closest neighbor was 5 miles away.  He believed that this was good farming area.  He and Jules Sandoz proved that if you cared and tended things enough, you could get anything to grow here.  He proved it by raising many fruits and vegetables that you don’t normally see grown locally. He wore out 3 good sets of oxen before he bought his first tractor and the bank loan that paid for it took several years to repay.

Bob only went to school one winter and could sign his name and read a few words, but his story was told in print by his lovely wife, Daisy.  It is a fascinating story of slavery by one who knew it on a  first hand basis.