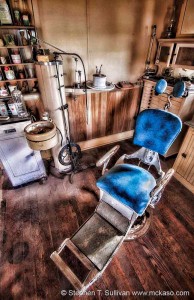 Everyone needed  to have a shave or haircut on occasion, but the Barber was also used as a medical man when no other was available for “blood letting”. “leaching”, or for the occasional stitch or tooth pulling.  barbers were accustomed to seeing blood and had alcohol treatments that could help in some cases.

If you were a competent barber you may also be the dentist depending on what the needs were.  The medical building is set up to show you how a barber and dentist would have shared the facilities, which was not all that uncommon until a building was available for each.  In early town development you built as you needed and reused what you had.

In the back room is the Dr. Office.  If the illness or injury was more than the dentist or barber could handle you got to see the doctor.  In the early turn of the century doctors also made house calls depending on the population of the area and the needs.  hospitals came much later and there were many doctors that saw patients in their own home office and sometimes had a few beds for continuous treatment.   Many babies were born at home, on the farm or ranch with the doctor or midwife in attendance.  later maternity hospitals were common in the 20’s and 30’s and were often run by the Catholic Nuns or some sort of nursing group.  It took a good 10 to 14 days to recoup from having a baby if you went to the hospital because they required you to rest.

Broken bones were set and cast and you were sent home or if a more serious break occurred you were put in traction with heavy sand bag weights and pulleys and put on restricted bed rest until you healed.  Illness was another matter and usually required extended bed rest.

Retirement homes as we know them were not common at this time simply because there were very few people who made it ti that stage of life and those that did often lived with their families and were cared for at home.