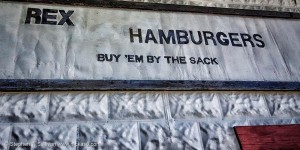 Rex Meyers came to Alliance in 1927 and with another fellow (name unknown) bought the Star Hamburger Shop located in the 100 block of Box Butte Avenue.  They changed the names to Rex’s and the adventure began.

Rex then went to Casper Wyoming to open another hamburger shop and while there his partner absconded with all their money so Rex was forced to come back to Alliance and run the shop here.

The shop has seven stools and Rex served hamburgers, pie, coffee and milk.  Chili was also added to the menu in winter and you could pick up your favorite candy bar too.  The hamburgers sold for a nickle each or six for a quarter.  Anyone who grew up in Alliance while Rex was in operation can testify to how wonderful his hamburgers were.  They were small, eighteen to the pound according to Frank Whaley who worked for Rex.  The hamburgers were fried in rendered beef suet and the grill was heated by a Coleman camp stove.

The meat was furnished by the IGA Palace Meat Market owned by Dobby’s father Marvin Lee from the time Rex opened until the Palace closed its doors in 1954.  Pete Stalos then furnished the meat until Rex’s went out of business.

The original frame building burned down sometime in the forties and a new brick building was built.  Rex was in business until around 1969 when he retired.  The business was sold, but only ran about another five years before it closed.