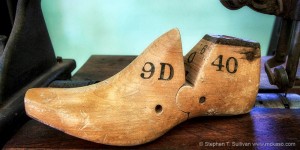 Every town has a cobbler’s shop at some point.  Ours was located in the alley behind one of the banks until it was moved to Yellowstone street.  In the 1940’s it became a location to house solders and families during the building of the air base.  At one time during the building and operation of the air base this building provided housing for four adults and four tiny children with nothing more then a sink, stool, washbasin and a two burner portable hot plate.

You will see various tools used by a Cobbler.  If there was no harness maker in town a Cobbler might fill in.  Their shops were usually close together and near the livery stable and the downtown area.

Shoes were worn until holes appeared then they were patched, mended and often passed onto the next in line.  often times there was no way of telling the right shoe from the left shoe and the “lasts” were made in “either foot” design (and you wondered where pointed toes came from).

Before velcro and zippers there were buttons, eyes, hooks, laces, straps and buckles.  There were no such things as arch support, soft insoles, traction treads, sneakers, track shoes, dress shoes, etc.  You received a hand made soft leather shoe that fit your feet and because of the cost you took care of them and wore them for a long time before getting rid of them.  Sensible shoes were the thing.  You wanted something that was going to protect your feet and still be wearable for all sorts of occasions.  Polish was used regularly and often one child had the duty of polishing all of the shoes before church on Sunday.

Durable leather was used for work shoes and every day shoes, but there was also some sense of fashion for the ladies in the cities.  many cobblers were aided by their wives in finding just the right kind of fabric (sometimes satin) for a new pair of ladies shoes.  Other times very soft and buttery leather was used depending on the need.  These were highly prized and very expensive and they were not desirable for farm or ranch life.  many woman then and now choose boots to wear at home and while working on the farm or ranch.