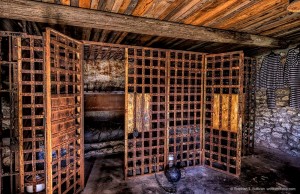 Everyone who has ever watched a Western movie knows about the jail.  What you may not know is how small they usually were.  A 6’x6′ cell does not have a lot of space.

Look closely at the two cells that are here in our jail and you quickly realize that each cell is built to house two people with two bunks.  These bunks are not much longer than five feet and about the width of a modern day crib mattress.  People were smaller then but even so, these were very tight quarters.  There is no walking around and it makes a modern day jail cell look absolutely spacious.  You had just enough room to stand up and take one or two steps.  Bathroom facilities were either an outhouse out back or a chamber pot.  Food was pushed through the slot at the bottom of the door.

These cells came from the Kearney area, but are very similar to the ones used in the Box Butte County Court House until the new jail facility was built.

If a prisoner was being moved the original ball and chain were often used.  This was a shackle attached to the prisoners ankle with a chain made from heavy iron and was attached to a small ball of either iron or possibly lead if it was available.  The total weight was somewhere around twenty five to seventy five pounds and it had to be carried if you were going to move from one place to another.

The jail provided another job for the local blacksmith as they usually built the cells.  Either metal straps or bar designs were used.  Hollywood uses the bar design because it allows for a better picture for the cameras.

Every town had to have a place to keep its lawbreakers captive.  it didn’t need to be much as far as amenities, but it had to house the person safely and keep them from being free.  Do you think this did the trick?

The windows of the building were made from bottles since glass was so hard to find.  There are still many bottle windows in the Western States.