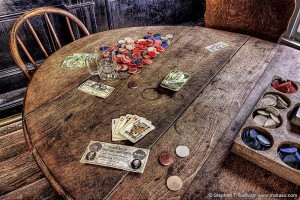 The Saloon played an important part in the social structure of any frontier town.  it was the accepted meeting place of the new comers of the town (much to the disgust of their wives, certainly).  It often served as a town hall and even as a court room if there was not a court house in the town,  It was the news center and it was the first place a trader went to seek information about the territory.

The Bordello upstairs was usually the only source of entertainment and occasionally social education that a young man might be exposed to while single.  It and the ladies who worked there played an important part in the life of many a lonely cowboy, traveling salesman or a single man.  Women were not plentiful on the frontier.  It was also typical for a single woman alone to work in a saloon if no other “proper” or satisfactory employment was available, but only long enough to meet the right man and get enough money saved to leave the area.  She had a reputation to maintain.

It was not uncommon for the saloon and bordello to be owned in whole or at least in part by the local Sheriff, Marshall or Constable.  If he was an owner he would often turn a semi blind eye to what went on there.

In those days if you were male and could stand a full head over the top of the bar you were old enough to drink.  ladies of “proper upbringing” of any age were not expected in the bar as this was typically a “men’s only” location.

There are several items in our saloon that are quite interesting.  The bar came out of a saloon owned by Billy King and was known as “Kings Corner”.  This was located on the South Eastern corner of third and Box Butte (where Radio Shack is located).  The bar was originally four times as long as it is now and was the longest in the state.  When prohibition came in the bar was gradually cut down to make room for more pool tables.   The skies on the wall are hand made.  The cow hide is from a Scottish Highlander, which was one of the imported breeds to come to the areas in the 1920’s.  They were a “fad” breed and never really caught on with the breeders of the Angus and Herefords we have locally.  The coat on the hook by the piano is made from a Hereford hide and weighs about as much as a small child.  There is also a soapstone for heating on the fire and then putting it under your feet in your backboard when you went home (or later in your model T).  There are also several pictures of what Alliance looked like in the early part of the century hanging on the wall by the bar.