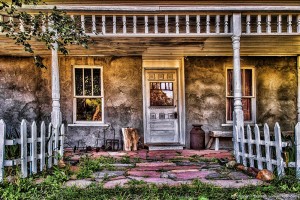 This is a reconstruction of a rather old building process that had been used locally.  Not every early settler was blessed with sod or lumber to use in the construction of their first house.  Some settlers had to use hay or rushes like those who settled in areas around Lakeside, Ellsworth, and various other areas within the sandhills.  In these types of locations they would cut and bale the hay, stack it, and use those bales for the walls of the house.  From there, limestone and sand were used to stucco the inside and outside walls.  Precious wood would then be used for roofing.  These houses maintain a fairly even temperature year around due to their high insulation value.  18″ of straw with Stucco on both sides really slows down heat transfer, either in or out.

Another thing to consider is these houses can be built fairly fast, cheaply, and will last a lifetime if properly cared for.  There are several of these houses still in existence and in use, in the surrounding communities.  They were easily added on to as the needs of the family grew and the construction process is not costly, just labor intensive.

Windows are inset and provided a nice seat, shelf or cooling rack for homemade pies if needed.  Glass was fairly hard to come by, so windows were kept to a minimum.

Many times, when later additions became needed, wood was more readily available and therefore was used for those extra additions.  The main structure of a baled hay house would often be completely enclosed by other building materials used in various additions.

The baled hay structure allows for not only heat and cold insulation, but also a high degree of sound proofing.  Old timers believed that what would keep you cool in the summer would also keep you warm in the winter, and as anyone who has ever lived in one of these houses can tell you, that is true!  Just one more example of how our ancestors made do with what they had available and did it well.

Sometimes our Pioneers knew much more than we do with our “modern technology”.  These alternative building methods are being “Rediscovered” in this age of high building costs and environmentally conscious needs.   Since the baled hay can be shaped into as big or small a structure as needed, and it is fairly easy to work with, it is again being looked at as a possible source for low cost building materials in rural areas where hay and straw are available.

There are now many state associations of Straw or Baled Hay House owners throughout the country.  Dobby is a charter member of the Nebraska Baled Hay Association.