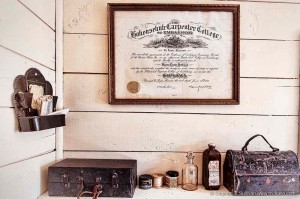 This building was created to show what it was like to handle death in the early times of our town. Often, whoever had woodworking skills in a town would also make the coffins for the dearly departed.  if there was no Undertaker in the community, the wood smith, barrel maker, wheel wright or carpenter might serve in that capacity.

After a town had been settled for a while the needs for funerals became more advanced.  Morticians and Funeral Directors made a business out of funerals only. This left the furniture makers, wheel wrights, carpenters and wood smiths free to go back to what they did best.

In the preparation room around the wall you will see some of the things that undertakers used in those days.  Everything from hand operated pumps to shaving kits and mirrors. There is also an actual display of embalming fluid used.  The different colors are used in different parts of the body where natural skin color was desired.  There is also a draining table that was used when the cadaver was laid out for the embalming process.  You will notice the troughs and holes in the corners where the fluid would run and collect in jars on the floor below.

The embalming processes as we know them today were developed after the Civil War.  Up to that time few people traveled far from their homes on a regular basis and transportation of cadavers was a rare thing.  Most people died in or near their home and were cleaned and dressed by family members.  The local preacher would come and make his call, say prayers for the family of the deceased and then would either go with the coffin that the furniture maker had built and delivered to the house or meet the funeral procession at the church yard for the service.

Refrigeration as we know it today was not available then, so bodies were cleaned, dressed and prepared for a funeral immediately after death.  If there was any waiting that had to be done, the body was usually put into a “viewing casket”.  These caskets are also on display here.  The body could be displayed and yet was not left open to the air.  You will notice that these coffins have locks on the side of them.  That was so the body could be sealed inside and protected.  Before the invention of modern embalming fluids, such things as arsenic and lime were used to preserve bodies.

Many visitors have asked about the disposal of bodily fluids.  There was no EPA to tell you how to do those things, so usually a hole was dug out back and those fluids were thrown into the hole along with the days trash.  no thoughts were given to ground or water contamination or the spread of possible diseases.

Out in the main room there are several examples of caskets that were used at different times.  The wicker basket is a recent addition to our collection and is very rare in this day and age.  Wicker has a tendency to deteriorate over the years. This wicker basket was used to move the body from the death site to the funeral home or to move the body from the death site to remote location via the railroad.  This wicker basket was used only as a transportation device and not as a casket and is similar in purpose as today’s “body bags”.  This was called a “hand basket” and I’m sure most of you have heard the comment “Going to hell in a hand basket”.  Well, now you know what one looks like.  There are also two children’s coffins that are also on display.  Many children never lived to see adulthood in the early years.  they would fall early and often to illness or accidents.  It is not unusual to read in history books where a family would have six to fifteen children, but only have a few survive to reach adulthood, marry and raise families of their own.

Many diseases that are almost unheard of today would ravage a community and claim many victims during its course.  The elderly and the young were prime targets.  if you were lucky and healthy enough to live to 60 you were considered very old and were most revered for your long life and great knowledge.  Few lived past that age and most that lived that long had been married several times and had lost many family members.