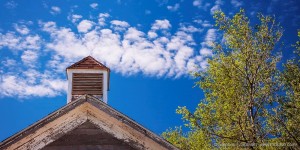 The purpose of a church was to establish a place of worship for a group of people who belonged to the same faith, while building a social structure within the community.  The building itself may have served many purposes as this one has in its lifetime.

Founded by German settlers in 1911, the congregation decided to start work on a new building in 1912.  This building was used as a church with services in both German and English.  A school was also run in this building and was also taught in both German and English thereby enabling all who wanted a chance and a place to learn to do so using their new language in their new land.

The building was added to, renovated, moved and converted several times in its life.  Once being a church and a school and later being a place to hold meetings for the Alliance Woman’s Club as well as serving as a welfare office for many years.

Often churches were the biggest building in town and many were also used as a community center regardless of the religious affiliation.  many town hall meetings were held in the community church and often more than one denomination of faith would have services in a shared building, if it was the only church building in town.

Communities were quick to build the necessary buildings needed for survival and churches were high on that list.  As a community would grow different religious affiliations would build their various churches.  it is still not uncommon to see several different churches in a small town.

Our church is now celebrating over 100 years of existence.  Furnishings were simple to begin, but grew in elegance as finances and congregations grew.  Two dozen wooden chairs fastened to boards on the floor, a blackboard for hymn numbers, a simple run runner down the aisle, a wood stove, altar, bible stand and a alter cloth finished up the last of the original furnishings.