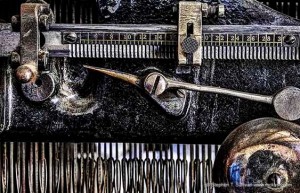 Inside this magical building you can see the makings of a local print shop.  These machines as big and heavy as they are could print a delicately fine and beautiful page when called upon by the printer.  newspapers, magazines, flyers, handbills, programs, and yes even wanted posters could all be printed on these machines.

Our machines were originally all hand powered and were later converted to electricity.  They were used by Parry Rader who was the originator and publisher of Iron Man Magazine for many years.  When he retired he sold the machinery to Ben Fisher who has used the press equipment to publish many items for various groups in town.  This was his hobby and he was excited to see it come to Dobby’s Frontier Town as its final resting place.

In our town two local papers had been published once a week on opposing days.  After World War I they merged and began publishing daily.